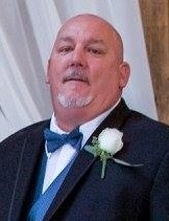 HEADLAND.… Alan McNeal, a resident of Headland, Alabama, passed away Friday afternoon, April 2, 2021, at a Dothan hospital. He was 57.

Funeral services will be held 10:00 A.M. Monday, April 5, 2021, at Wright Funeral Home & Crematory Chapel with Reverend Sam White officiating. Burial will follow in the Gardens of Memory Cemetery. The family will receive friends from 4:00 until 6:00 P.M. Sunday at Wright Funeral Home & Crematory. At other times the family will be at the family residence; 5765 Headland Avenue, Dothan, Alabama 36303.

Alan was born in Dothan, Alabama to James Charles McNeal and the late Joyce Elaine Purvis McNeal. He has lived in Headland his entire life. He was a 1982 Graduate of Headland High School. He was retired from the Michelin Dothan Manufacturing. After his retirement he worked with Great Southern in Abbeville, AL and also Lewis Inc in Headland, AL.

Along with his mother, he also was preceded in death by a half-brother, Chucky McNeal; his father-in-law, Wayne Sauls; his nephew, David “Cricket” McNeal; and his great-nephew, Maxton Hughes.

Our establishment does own and operate its own crematory, so your loved one never has to leave our care.
To order memorial trees or send flowers to the family in memory of Alan McNeal, please visit our flower store.