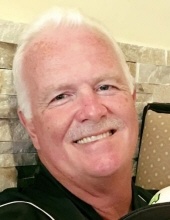 CANTON, GA… Bruce McMilton Rowland, a resident of Canton, Georgia, formerly of Headland, Alabama, passed away Wednesday, September 29, 2021, at Wellstar-Kenneston Hospital in Marietta, GA. He was 58.

Funeral services will be held 2:00 P.M. Saturday, October 2, 2021, at Wright Funeral & Crematory Chapel with Reverend Mike Fortenberry officiating. Burial will follow in the Newville Baptist Church Cemetery. The family will receive friends from 12:30 until 2:00 P.M. before the service. Wright Funeral Home & Crematory are in charge of the arrangements.

Flowers will be accepted or contributions may be made to the Headland Diamond Club, 8 Sporman Street, Headland, AL 36345.

Mr. Rowland was born in Dublin, GA to Betty Fowler Rowland and the late Bobby Norman Rowland. He moved to Headland at a young age and became involved with sports. He was a 1981 Graduate of Headland High School where he lettered in football and baseball, and played one year of basketball. Bruce was also an avid hunter, fisherman and golfer. He furthered his baseball career at Wallace College and Troy State University, where he played under scholarship for the Trojans. Following his college years, he assisted with coaching several teams. He encouraged his son with his passion of baseball, and spent many hours pitching, hitting, and enjoying time at baseball fields. He was most recently involved with his son’s “Elite Travel Ball” baseball team. Bruce and his son enjoyed attending the Atlanta Braves ballgames. Mr. Rowland was owner/operator of his own financial marketing company. He has lived in the Atlanta, GA area for over 20 years. He attended Hopewell Baptist Church, in Canton, GA.

Leaving to cherish his memories are his son, Joshua Rowland of Canton, GA; his mother, Betty Fowler Rowland of Headland; his sisters, Terri Rowland Killingsworth of Destin, FL and Judye Rowland Dykes of Headland; his brother, Mitch Rowland (Shana) of Eufaula; his nieces and nephews, Brad Killingsworth (Brittany), Laci Landreau (Kelly), Paige Riddick (Christopher), Holli Blount (Will), Jessica Patton (Kyle), Hillary Walker (Justin), and Trevor Dykes (Madison); twelve great-nieces and nephews. He was also survived by the mother of his son, Stacie Cantino, and a special son, Tanner Young, both of Canton, GA.

Serving as active pallbearers will be Brad Killingsworth, Kelly Landreau, Trevor Dykes, David Yeomans, Justin Walker, and Marc Willis. The family has extended an invitation to the Headland High School Class of 1981 to serve as honorary pallbearers.

Our establishment DOES OWN AND OPERATE ITS OWN CREMATORY, so your loved one never has to leave our care.
To order memorial trees or send flowers to the family in memory of Bruce M. Rowland, please visit our flower store.