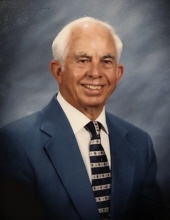 DOTHAN…Charles Alfred Lewis, a resident of Dothan, Alabama, passed away Monday morning, May 17, 2021, at Extendicare Health & Rehabilitation Center. He was 89.

Mr. Charles was born in Dothan, Alabama to the late Charles Arthur Lewis and Rilla Yates Lewis. He was a 1949 Graduate of Dothan High School. He was also a 1953 Graduate of Auburn University. After graduating from Auburn University, he enlisted in the U.S. Air Force from 1953-1957, where he served his country at the end of the Korean War. He was a strong and faithful member of the First Baptist Church of Dothan. After his tour with the U.S. Air Force he returned home and worked as the accounting office manager for Coca-Cola Bottling Company of Dothan for over thirty years. He also worked with Dothan Glass and First United Methodist Church of Dothan in their accounting office. Mr. Lewis enjoyed serving his community through the Civitan & Kiwanis Clubs of Dothan.

Along with his parents he was also preceded in death, on March 23, 2021, by his wife, Clara Nell McElhenney Lewis.

Our establishment does own and operate its own crematory, so your loved one never has to leave our care.
To order memorial trees or send flowers to the family in memory of Charles Alfred Lewis, please visit our flower store.