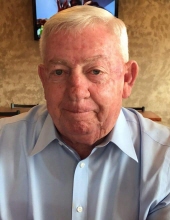 ASHFORD.… Chester Lee McKin, a resident of Ashford, passed away Tuesday morning, June 9, 2020, at his home. He was 74.
A memorial service will be held 2:00 P.M. Friday, June 12, 2020, at the Wright Funeral Home & Crematory Chapel with Reverend Kyle Gatlin officiating. The family will receive friends from 1:00 until 2:00 P.M. Friday before the service. Wright Funeral Home & Crematory is in charge of the arrangements.
In lieu of flowers, the family ask that contributions be made in Mr. McKin’s honor, to the Good Samaritan Cancer Fund 501C; P.O. Box 5609, Dothan, Alabama 36302, founded in 1989 to assist local cancer patients with pain medications and transportation for appointments (a tax-deductible contribution).
Chester was born in Fayetteville, Tennessee to the late Arthur Howard McKin and Laura Rachel Henderson McKin. He was a member of the Kinsey Methodist Church. He owned and operated CLM Construction & Plumbing until his retirement.
Along with his parents, he is preceded in death by two sisters.
Leaving to cherish his memories are his wife of 56 years, Ruby Carol McKin; his daughter, Samantha Faye Walden (Robert) of Headland; his son, David McKin of Ashford; three sisters; three brothers; seven grandchildren; and eight great-grandchildren.

WRIGHT FUNERAL HOME & CREMATORY
Phone 334-693-CARE (2273)
www.wrightfuneralhomeandcrematory.com
…celebrating a life one family at a time…
Our establishment does own and operate its own crematory, so your loved one never has to leave our care.
To order memorial trees or send flowers to the family in memory of Chester Lee McKin, please visit our flower store.