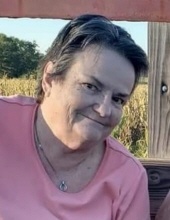 SLOCOMB…Cynthia Ann Johnson, a resident of the Slocomb, AL, passed away late Thursday night, September 23, 2021, at a Dothan hospital. She was 62.

Mrs. Johnson was born in Birmingham, Alabama to the late Edward Lane Shinn and Annie Pearl Thomas Shinn. She lived most of her lifetime in Slocomb, Alabama. She was a 1978 Graduate of Slocomb High School. She was a member of the New Harmony Baptist Church in Cottonwood, Alabama. She was retired from the Sony Corporation in Dothan, Alabama. She enjoyed her retirement while traveling as a member of the Wiregrass Good Sam’s RV Club with her husband, Marty Johnson, whom passed away a short ten months earlier than she did. She loved cooking and canning food. She loved her family and friends deeply, especially her granddaughter Charlianna.

Our establishment DOES OWN AND OPERATE ITS OWN CREMATORY, so your loved one never has to leave our care.
To order memorial trees or send flowers to the family in memory of Cynthia Ann Johnson, please visit our flower store.