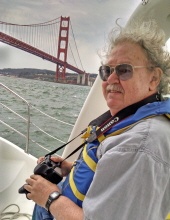 DAVID MICHAEL OHLHAUSEN
COLUMBIA, AL.…David Michael Ohlhausen, a resident of Columbia, AL, passed away Tuesday morning, August 4, 2020, at his home following a lengthy illness. He was 71.
A graveside memorial service will be held in Buffalo Gap, Texas at a later date.
David was born on December 21, 1948 in Abilene, TX to the late Vernis L. Ohlhausen and Lena Lorene Hodges Ohlhausen. David earned his BS degree in Occupational Safety and Health from Texas A&M - Corpus Christi in 2005. He had many skills and was able to fix most anything, thanks to the lessons his father taught him, but is most known for his work in facilities maintenance. He was also an avid photographer. He had previously lived in Rockport, TX, Abilene, TX, and Buffalo Gap, TX before moving to Columbia, AL 5 ½ years ago.
Along with his parents, he was preceded in death by three sisters, Dovie, Betty and Velma.
Leaving to cherish his memory as the “baby brother” are his sisters, Flora Bird of Payson, AZ, Dollie Ostlien of Abilene, TX; and his brother, Cloris (Kathy) Ohlhausen of Lindale, TX. He is also survived by his five children, Renae, Rebecca, Jacob, James & Joanna, six grandchildren, several nieces and nephews, many close friends and his beloved dog Ruby.
In lieu of flowers, please send memorial donations to the American Heart Foundation, Alzheimer’s Association or the American Diabetes Association.
WRIGHT FUNERAL HOME & CREMATORY
Phone 334-693-CARE (2273)
www.wrightfuneralhomeandcrematory.com
…celebrating a life one family at a time…
Our establishment does own and operate its own crematory, so your loved one never has to leave our care.
To order memorial trees or send flowers to the family in memory of David Michael Ohlhausen, please visit our flower store.