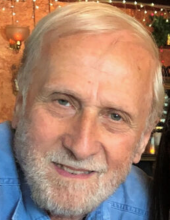 During 1964-1967 Ed proudly served his country as a Corporal in the United States Marine Corps with a tour in Vietnam. He later earned an academic Ph.D. in Religious Studies and taught psychology, parapsychology, and religion courses at the university and college level. Ed spent his later years as a spiritualist minister, medium, and teacher at Southern Cassadaga Spiritualist Camp in Cassadaga, Florida. He enjoyed reading, writing poetry and books, traveling, being outside in nature, and spending time with his family and friends.

He is survived by a son, Clinton Conklin (Michelle), of Woodland Hills, California and a daughter, Nichole Bailey (Stuart) of Headland, Alabama as well as his beloved grandchildren, Nicholas, Christian, Zachariah, Garrett, Whitney, Heath, and Elijah, and his treasured great grandchildren Sophia and Ava.

In addition, his sisters, Kathleen Scharpf and Laurie Price, survive him.

Interment will be at the Rock Hill Cemetery, Rock Hill, New York, with military honors.

In lieu of flowers, donations may be made to Kindred Hospice, Dothan, AL or to a local hospice organization.

Our establishment DOES OWN AND OPERATE ITS OWN CREMATORY, so your loved one never has to leave our care.
To order memorial trees or send flowers to the family in memory of Edward Dennis Conklin, please visit our flower store.