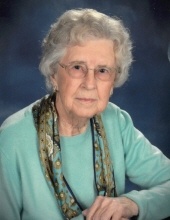 Graveside services will be held 11:30 A.M. on Friday, June 17, 2022, at Mt. Pleasant Baptist Church Cemetery (formerly Wiggins Cemetery at Grimes) with Dr. Cecil M. Sanders, Jr. officiating. The family will receive friends from 10:00 until 11:00 A.M. at Wright Funeral Home & Crematory in the Dogwood Room. Wright Funeral Home & Crematory is in charge of the arrangements.

Mrs. Warren was born in Headland, Alabama to the late Clarence P. Jordan and Aura Vesta Armstrong Jordan. She lived most of her childhood in the Union Community, near Slocomb, Alabama. She was a 1939 Graduate of Slocomb High School. She attended Troy State Teachers College (now Troy University), and worked in the 1940’s with the Civil Service at the Air Base in Marianna, Florida.

She has lived in Headland, Alabama since 1952, working at the Dothan Eagle and retiring from Wallace Community College in 1982. She was a member of the First Baptist Church – Headland, her entire adult life. She also taught Sunday School and served on various committees and was in leadership roles for many years at First Baptist Church – Headland.

Along with her parents, Mrs. Warren was also preceded in death by her husband, J.B. Warren; her son Art de la Croix; and her brothers, Khyle Jordan, Sr. and Roy B. Jordan.

The family would like to express their sincere appreciation to the caregivers who have given loving care to Mrs. Warren for the last several months: Ruby Reeves, Pam Johnson, JoAnna Caster, and Lynn Hollins.

Our establishment DOES OWN AND OPERATE ITS OWN CREMATORY, so your loved one never has to leave our care.
To order memorial trees or send flowers to the family in memory of Ethelene de la Croix Warren, please visit our flower store.