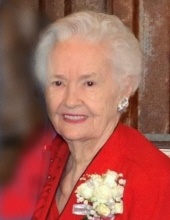 DOTHAN…Fay Lindsey Deal, a resident of Dothan, Alabama, passed away Saturday Morning, April 10, 2021, at Flowers Hospital in Dothan, Alabama. She was 92.

A celebration of her life will be held 4:00 P.M. Wednesday, April 14, 2021 at the Wright Funeral Home & Crematory Chapel, with Dr. Jeff Peacock officiating. There will be a private family graveside service following in the Beulah Baptist Cemetery. Family will receive friends one hour prior to the funeral, from 3:00 until 4:00 P.M. at Wright Funeral Home & Crematory Chapel.

She was born Marion Fay Lindsey, on January 20, 1929, in Bay County, Florida to the late Micajah Thomas Lindsey, III and Sally (Pearl) Pauline Hammock. She was the youngest of their seven children. In addition to her parents, Fay was preceded in death by her husband of over 62 years, Herbert Deal, Jr., and her brothers Clinton, Douglas, Huey, Edward and Ray Lindsey. She also had one beloved sister, Coy Paige Lindsey Bull who passed away in 2019.

Fay was born at home on East Bay, near Sandy Creek and Wetappo, Florida. She had wonderful stories of her five older brothers and sister playing, fishing and looking for pirate treasure. After attending Bay County High School, she and her sister moved to Dothan. They lived in a boarding house for women on Main Street. Fay began working at L and J Studio (at the hump on South Oates Street) hand tinting portraits as there were no color photos then. She met her husband Herbert Deal, Jr. at his brother’s (Gerald) radio and tv repair shop across the street from L & J. They married in 1948, moved to Herbert’s farm and started their family. She devoted her life to raising her five children in a loving Christian home where there were three hot meals every day. In her younger days, when her eyesight was better, she loved to sew while her children were at school or napping. Fay also loved to grow all their vegetables and had a beautiful yard and flowers.

Fay and Herbert joined Beulah Baptist Church in the early 1950’s. She was a faithful servant to her Lord, her church, and her family. She will be remembered by all who knew her as a beautiful, kind and caring woman who never spoke ill of anyone.

In addition to her husband and siblings, Fay was preceded in death by her youngest son, George Lindsey (Lynn) Deal in 1981.

Herb, Mike and Barbara would like to extend their appreciation and gratitude to their brother, Tim, who was her devoted caregiver during Fay’s final years.

Our establishment does own and operate its own crematory, so your loved one never has to leave our care.
To order memorial trees or send flowers to the family in memory of Fay Lindsey Deal, please visit our flower store.