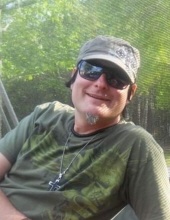 Dothan, AL….. Jason Shelley, a resident of Dothan, passed away Monday July 18, 2022, at his home. He was 49.
A private service will be held on a later date.
Jason Shelley was born December 07, 1972, to Harold and Rose Jackson Shelley in Dothan, Alabama. He graduated Dothan High School, class of 1991. He was employed as a musician and was incredibly talented. He was a guitarist as well as lead vocalist in a band. He also wrote numerous songs. He was an avid Alabama fan and loved his family.
Leaving to cherish his memories are his three children, Dylan Martin (Heather), Jayson Aaron Shelley and Aiden Shelley; his parents Harold and Rose Shelley; his grandchild Weston James Martin; a sister Lisa Smith; a niece Joslyn Smith and nephew Stokes Hallford; special aunt Beulah Morgan; many other loving family members and friends.

To order memorial trees or send flowers to the family in memory of Jason Eric Shelley, please visit our flower store.