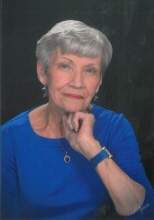 DOTHAN.Jerry Ann Crews, a resident of Dothan, formerly of Grimes /Napier Field, passed away Friday evening, December 6, 2019 at a Dothan hospital. She was 80.

Mrs. Crews was born on July 23, 1939 in Dale County, Alabama near Grimes / Napier Field. She was the daughter of Foy And Cannie (Mercer) Johnston and the foster daughter of Graves and Spella (Johnston) Woodham. Jerry Ann was a graduate of Midland City High School. She was a lifetime resident of Dale County before moving to Dothan 15 years ago. She was loan coordinator at Regions Bank before her retirement. She was a member of the Calvary Baptist Church in Dothan. Jerry Anns ability to connect and talk with anyone was the hallmark of her work outside the home and her community. As a loving mother, wife, sister, aunt, and devoted friend, Jerry Ann profoundly touched many lives. She is loved beyond measure and will be severely missed. Along with her parents she was preceded in death by her husband, William Harrell Crews, and a brother Billy Joe Johnston.

celebrating a life one family at a time
To order memorial trees or send flowers to the family in memory of Jerry Ann Crews, please visit our flower store.