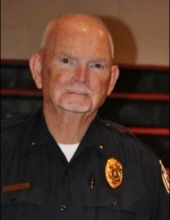 Funeral services will be held 4:00 P.M. Sunday, April 18, 2021, at Wright Funeral Home & Crematory Chapel with the Reverend Guy Causey officiating. Burial will follow in the Union Springs Baptist Church Cemetery, near Newville, Alabama. The family will receive friends from 2:00 until 4:00 P.M. at Wright Funeral Home & Crematory before the service. At other times, the family will be at the home of his son, Eric Jones, 164 Solomon Road, Headland, Alabama 36345.

Mr. Jones was born in Henry County, Alabama near Capps Community, to the late Warren Cecil Jones and Mavis Clair Cutchen Jones. He lived in the Capps Community between Newville and Abbeville, Alabama areas his whole life. He was a graduate of the 1966 Newville High School. He was a lifetime member of the Union Springs Baptist Church. He worked in law enforcement with the Henry County Sheriff’s Department and the Abbeville Police Department for forty-two years, ending with his retirement as Abbeville Police Chief.

Along with his parents, he was also preceded in death by his wife, Linda Jean Griffin Jones; a sister, Celia Nell Jones; and his brothers, Cecil Timothy Jones and Joseph Quincey Jones.

Our establishment does own and operate its own crematory, so your loved one never has to leave our care.
To order memorial trees or send flowers to the family in memory of Jesse Mike "Chief" Jones, please visit our flower store.