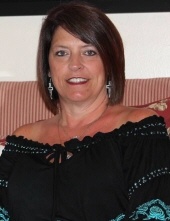 HEADLAND.…Jill Owens Walden, a resident of Headland, Alabama, passed away Friday morning, May 14, 2021, at her home. She was 52.

Memorial Services will be held at 3:00 P.M. Sunday, May 16, 2021, in the Worship Center of the First Baptist Church of Headland, Dr. Cecil M. Sanders, Jr. officiating. The family will receive friends from 2:00 until 3:00 P.M. prior to the service, in the Worship Center. Wright Funeral Home & Crematory is in charge of the arrangements.

In lieu of flowers, the family has requested that contributions be made to either; First Baptist Church "Bridge to Tomorrow" Building Fund, 301 E. Church Street, Headland, AL 36345 or to the St. Jude Children’s Research, 600 Beacon Pkwy Birmingham, AL 35209.

Ms. Walden was born in Dothan, Alabama but lived most of her entire life in Headland, Alabama. She was a member of the First Baptist Church – Headland. She was a 1986 Graduate of Headland High School, in which she was Co-Valedictorian of her class. She served her country in the U.S. Air Force, and was stationed at Eielson Air Force Base in Fairbanks, Alaska from 1989- 1991. After her U.S. Air Force career, she worked with the civil service in Fairbanks, Alaska. After working with the civil service, she returned home where she started working with the U.S. Postal Service. She retired a Post Master of the Clayton Office and Louisville offices, with twenty-seven years of service.

Serving as honorary pallbearers will be he First Baptist Church Esther Sunday School Class and her Covenant friends.

The family wishes to express their gratitude for the love & compassionate care given to Jill, by Kindred Hospice.

Our establishment does own and operate its own crematory, so your loved one never has to leave our care.
To order memorial trees or send flowers to the family in memory of Jill Owens Walden, please visit our flower store.