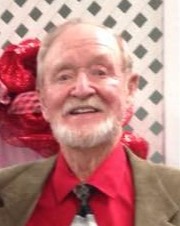 Funeral services will be held 2:00 P.M. Saturday, December 10, 2022 at Mt. Ararat Baptist Church with Reverend Hugh Kirkland officiating. The family will receive friends from 1:00 until 2:00 P.M. at the church, prior to the service. Burial will follow in the church cemetery. Wright Funeral Home & Crematory is in charge of the arrangements.

In lieu of flowers, memorial contributions may be made to the Mt. Ararat Baptist Church Cemetery Fund, c/o Avis Kirkland, 1805 Webb to Kinsey Road, Webb, Alabama 36373.

Mr. Gouge was born in Banner Elk, North Carolina to the late Honard Clayton Gouge and Annie Mae Mackie Gouge. After graduating from Cranberry High School, he served his country in the U.S. Army. While in the U.S. Army he was stationed at Ft. Rucker, Alabama where he met his wife, Shirley Woodham Gouge. He was a well-known for his carpenter skills and his can fix-it anything skills. He was a well-known home builder.

Along with his parents, he was also preceded in death by his wife, Shirley Woodham Gouge; his son, Joe Edward Gouge; and his brother Billy Dean Gouge.

To order memorial trees or send flowers to the family in memory of Joe M. Gouge, please visit our flower store.