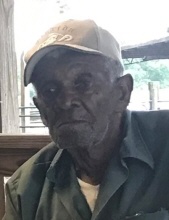 HALEBURG, AL…Johnny Grimsley, a resident of Haleburg, Alabama, was called home to be with the Lord following a brief illness, Thursday, May 5, 2022, at a Dothan hospital. He was 93.

Johnny was one of five children born to the late Katie Grimsley Cothorn and raised by Lawrence Cothorn. He spent his entire childhood and adult life in Haleburg, Alabama. Beginning at the age of 14 years old, he worked in the fields until he was told it was time to retire. Every morning, he would wake up early and before doing anything he would walk for several miles to get in his daily exercise. In addition to walking, he spent a lot of time sitting out on his porch watching as the cows were being fed, and he enjoyed picking up pecans during pecan season. Every Sunday morning, he and Earl Dukes would go to the market for groceries, and one thing for sure he made a point to get pork chops, his favorite meat! He also visited the Haleburg Senior Center where he was able to eat lunch and spend time drinking multiple glasses of ice-cold tea with his friends. He took Friday trips to Georgia with his Special Cousin (Joe Grimsley). Let us not forget, he was a good storyteller and his family enjoyed listening to the stories he told. God blessed him with a good life, and he enjoyed when family came to visit, especially when they stopped by Kentucky Fried Chicken for some chicken fingers and mashed potatoes. Oh boy did he enjoy that treat!
He joined Oakley Grove Methodist Church at an early age and remained a member until he was called home.

Johnny was preceded by his mother, Katie Cothron and his father Lawrence Cothron, brothers, George Grimsley and Sam Cothron.

The family wishes to express their appreciation and gratitude to Mr. Terry, Mrs. Margaret, Jim and Jessica Yance for their prayers, support and outpouring of love though out all the years for seeing and taking care of Johnny, especially during this difficult time. We will never be able to repay you for what you all have done.

In addition, a very special thank you to Earl Dukes and his special cousin Joe Grimsley. You both were his bothers, and he loved you both so very much!

To order memorial trees or send flowers to the family in memory of Johnny Grimsley, please visit our flower store.