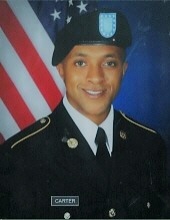 ABBEVILLE…Jordan A. Carter, a resident of Abbeville, Alabama, passed away Thursday, June 3, 2021, at his home. He was 28.

Mr. Carter was born in Dalton, Georgia and lived there and in Abbeville, Alabama most of his life. He graduated from Southeast Whitfield High School in Dalton, Georgia. After graduation he joined the U.S. Army. After serving in the military, he moved back to Abbeville, Alabama where he resided the last eight years. He was a member of the Bethlehem Missionary Baptist Church of Abbeville. He was currently working with Abbeville Fiber.

Mr. Carter was preceded in death by his father, Jerry Lee Carter.

Our establishment DOES OWN AND OPERATE ITS OWN CREMATORY, so your loved one never has to leave our care.
To order memorial trees or send flowers to the family in memory of Jordan A. Carter, please visit our flower store.