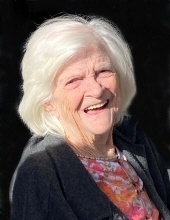 DOTHAN… Kathleen Smith "Kat" Hughes, a resident of Dothan, Alabama, passed away Saturday evening, April 16, 2022, at Wesley Place on Honeysuckle, where she has lived for the past five years. She was 94.

In lieu of flowers, contributions may be made to the First Baptist Church of Dothan, 300 West Main Street Dothan, Alabama 36301.

Mrs. Hughes was born on April 18, 1927, in Geneva County, Alabama to the late Gertrude Smith and Myrtie Baker Smith. She lived there until after she graduated from Geneva High School. In 1945, following the conclusion of World War II, Kathleen met the love of her life, William M. “Bill” Hughes, and they were married. In 1947, they moved to Dothan where they lived the remainder of their lives together. They had three sons of whom she was extremely proud. Bill and Kathleen were long time members of Southside Baptist Church in Dothan and she was a Sunday School and Training Union Teacher. After many years, Kathleen and her family moved their membership to First Baptist Church where she volunteered on many committees and becoming known as a wonderful cake baker, which she enjoyed. She was an active member of the Senior Adult group at FBC and enjoyed going on trips and fellowships with her fellow members. Kathleen worked with GTE (General Telephone) for 40 years as an operator, retiring in 1989. She enjoyed traveling with Bill as well as staying home and gardening. She supported and encouraged all three of her boys, whether it was in sports, music, or just in life.

Serving as a honorary pallbearer will be her only surviving brother-in-law, Kenneth Potts.

WRIGHT FUNERAL HOME & CREMATORY
Phone 334-693-CARE (2273).
www.wrightfuneralhomeandcrematory.com
…celebrating a life, one family at a time…
To order memorial trees or send flowers to the family in memory of Kathleen Smith Hughes, please visit our flower store.