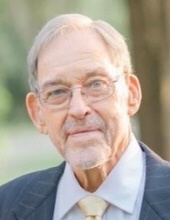 Funeral services will be held at 2:00 P.M. Monday January 17, 2022, at Liberty United Methodist Church in Abbeville, Alabama, with Reverends Ray and Dianne Kelly and Steve Nolin officiating. The family will receive friends one hour prior to the service. Burial will follow in Gardens of Memory Cemetery in Headland, Alabama. Wright Funeral Home & Crematory is in charge of arrangements.

Flowers will be accepted, or contributions may be made to the Liberty United Methodist Church Memorial Fund in memory of Kenneth Riley.

Mr. Riley was born October 22, 1936, in Chipley, Florida, to the late Willie Redden Riley and Ina Lucille Duncan Riley. He grew up in the Sardis Community in Hartford and attended Geneva County High School, graduating in 1954. He enlisted in the National Guard and was activated to the Mojave Desert in CA during the Berlin Crisis in 1961. Mr. Riley met and married Erma Smith Riley, and they raised three beautiful children: Kenny, Cindy, and Michael. He was employed by SC Johnson Company for over thirty-four years, which took him to Dothan, AL, Columbia, SC, and Marietta, GA, before retiring as a key accounts manager. Mr. Riley loved fishing, Atlanta Braves baseball, and SEC football, especially Alabama, Auburn, Kentucky, and Georgia. Kenneth and Erma were charter members of Highland Park United Methodist Church in Dothan where he served as a Lay Leader and as the MYF Leader for many years. More recently, he was a member of Liberty United Methodist Church where he served as a Lay Leader. Kenneth loved serving his Lord and leaves behind a legacy of faith and family. He and Mrs. Riley were also blessed with four wonderful grandchildren: Riley, McKenna, Rebekah, and Meghan.

In addition to his parents, he was preceded in death by a son, Kenny Riley, brother Woodie Edward Riley, and sisters Alta Marie Riley Britt and Opal Wyvonne Riley Taylor.