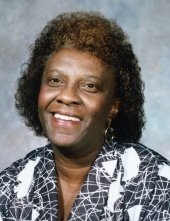 MIDLAND CITY.…Lena Mae Gibson Ludgood, a resident of Midland City, Alabama, passed away Wednesday night late, May 12, 2021, at her home. She was 83.
Funeral services will be held 1:00 P.M. Saturday, May 22, 2021, at Shiloh Missionary Baptist Church of Midland City, Alabama, with Minister David Collins officiating. Burial will follow in the church cemetery. The family will receive friends 5:00 until 7:00 P.M. Friday evening at Wright Funeral Home & Crematory. Wright Funeral Home & Crematory is in charge of the arrangements.
Mrs. Lena Mae Gibson Ludgood was born in Clayton, Alabama to the late Alvin Gibson and Katie Bell Fenn. She lived most of her adult life in and around the Midland City area. She was a member of the Shiloh Missionary Baptist Church of Midland City, Alabama, where she was in the Senior Adult Choir. She also was a member of the Lady’s Aid Society and the Missionary Auxiliary where she served as president.
Along with her parents she was preceded in death by her husband of fifty-three years, Walter Lewis Ludgood; a step-daughter, Sharon Black; her brothers, Willie James Gibson, Alvin Gibson, Jr., Robert Gibson, and Wiley Gibson; her sisters, Elouise Beacham, Katie Mable, and Mary Jefferson.
Leaving to cherish her memories are her sons, Willie H. Elder (Diane) of Headland, AL, Larry Ludgood (Robin) Fayetteville, NC, Walter Ludgood, Jr. (Annette) of Gulfport, MS; her God-Children, David & Debra Collins of Midland City, AL; her sister, Robbie C. May (Leon) of Birmingham, AL; her nine grandchildren; her fourteen great-grandchildren; her one great-great-grandchild; and her great aunt, Mary Bryant of Dothan.
The family wishes to express their gratitude to Ms. Lena’s caregivers, an angel from heaven on earth Mary Ball, Willie’s sisters-in-law Essie McLeod and Ruby Thomas. Also, to the coordinator, Shada Mathis and staff, with the Rehabilitation Center at Wesley Place on Honeysuckle in Dothan, Alabama.

Our establishment does own and operate its own crematory, so your loved one never has to leave our care.
To order memorial trees or send flowers to the family in memory of Lena Mae Gibson Ludgood, please visit our flower store.