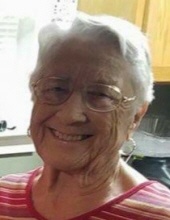 KINSEY, AL… Lorell Sanders Mims, a resident of Kinsey, Alabama, passed away Sunday night, May 8, 2022, at Henry County Health & Rehabilitation. She was 91.

Graveside services will be held at 10:00 A.M. Tuesday, May 10, 2022, at Gardens of Memory Cemetery, with Reverend Brad Hardy officiating. The family will receive friends following the service. Wright Funeral Home & Crematory is in charge of the arrangements.

Mrs. Mims was born in Henry County, Alabama to the late Joe Sanders and Nora Parker Sanders. She had lived in the Atlanta, GA area and Albany, GA area before moving back to Kinsey over fifty-seven years ago. She was a homemaker, which she loved, because she loved her children, grandchildren, and great-grandchildren. She loved cooking and also working in her yards. When she could no longer do her own yard work, at the age of 88, she would get aggravated when no one could do it like she could. She was a member of the Kinsey Baptist Church.

Along with her parents, she was also preceded in death by her husband, Arthur Carl Mims; her daughter, Kimberly Faye Mims; her son Rodney Mims; her brothers, Robert Sanders, Buford Sanders, Jody Sanders, and James Sanders; her granddaughter, Rachel Mims; and her great-granddaughter, Penelope Wheeler.

Our establishment DOES OWN AND OPERATE ITS OWN CREMATORY, so your loved one never has to leave our care.
To order memorial trees or send flowers to the family in memory of Lorell Sanders Mims, please visit our flower store.