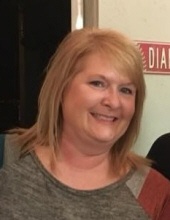 DOTHAN, AL… Lori Lamb Weathington, a resident of Dothan, Alabama, passed away late Thursday night, May 12, 2022, at her home. She was 55.

In lieu of flowers the family has requested that contributions be made in Lori Lamb Weathington’s honor, to your favorite charity.

Ms. Weathington was born in Pensacola, Florida to the late Joe Robert Lamb and Delores Rogers Lamb Bell. She lived most of her childhood in Dothan, Alabama. She was a 1984 graduate of Dothan High School. She moved to the Headland area about twenty-five years ago. She was a member of the Bethlehem Baptist Church in Headland. She loved playing softball. She was an avid Alabama football fan. She enjoyed her trips to the beach. She never met a stranger, where she could always strike up a conversation with anyone. Her life was her grandbabies.

Our establishment DOES OWN AND OPERATE ITS OWN CREMATORY, so your loved one never has to leave our care.
To order memorial trees or send flowers to the family in memory of Lori Lamb Weathington, please visit our flower store.