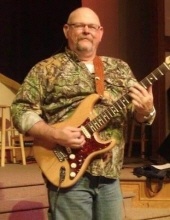 A worship service will be held at 3:00 p.m. on Sunday, February 6, 2022 at Blackwood Church, Henry County, Alabama. The family plans to have a service in Texas at a later date.

Mark was born October 22, 1953 in Fort Worth, Texas, to Charles Emery and Kathleen Nash McAfee. He graduated from Eastern Hills High School in 1972 and received a B.S. degree from Texas Tech University, Lubbock, Texas in 1977.
Mark married Vivian Powell McAfee of Borger, Texas in 1977. They lived briefly in Lubbock before moving to Tahoka, Texas in 1978 where he and Vivian remained until moving to Headland, Alabama in 2014. Mark and Vivian were members of First Baptist Church, Tahoka and after moving to Alabama, Blackwood Church, Headland. Recently they joined Victory Family Church, Dothan, Alabama.

Mark worked at Lyntegar Rural Electric co-op in Tahoka retiring in 2014. Mark loved Jesus. He spent time in devotion as a lifestyle and he was always talking to people about the love of God. Mark was a lifelong musician playing multiple instruments. He led worship at several churches and events and was currently on the Praise team at Victory Family Church, Dothan. Mark loved Vivian. Mark loved his daughters and grandchildren and family and friends. People remember him for his passion for worshipping Jesus, his devotion to his family, his musical talent, his hugs and his integrity.

Instead of flowers, send memorials to a charity or church of your choice.

He was preceded in death by his parents.

Our establishment DOES OWN AND OPERATE ITS OWN CREMATORY, so your loved one never has to leave our care.
To order memorial trees or send flowers to the family in memory of Mark Emery McAfee, please visit our flower store.