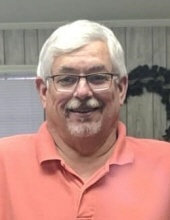 SLOCOMB.…Marty Oneal Johnson, a resident of Slocomb, AL passed away Monday morning, November 2, 2020, at his home. He was 62.

Funeral services will be held 11:00 A.M. Friday, November 6, 2020, at Wright Funeral Home & Crematory Chapel with Brother Michael Carr and Brother Bill Smith officiating. Eulogy given by Sister Jean Smith. Burial will follow at the Blackwood Church Cemetery. The family will receive friends from 10:00 until 11:00 A.M. Friday before the service at Wright Funeral Home & Crematory.

Marty was the son of Mildred Helms Johnson and the late Merwin O. Johnson. He was a 1977 graduate of Headland High School. He was retired from the Sony Corporation in Dothan, Alabama. He was enjoying his retirement, where he was a member of the Wiregrass Good Sam’s RV Club. He was a member of the New Harmony Baptist Church in Cottonwood, Alabama. His passion was playing the piano, and worshiping his Lord through music. He had a unique soul – one that loved so deeply. He had a genuine kindness that showed people he cared. He loved his family more than anything in the world, especially his granddaughter, Charlianna.

Along with his father, Marty is preceded in death by his sister, Nancy K. Johnson and a special cousin, Eric Tew.

Leaving to cherish his memory and his music are his wife, Cindy Johnson; his daughter, Kendell LaShea Coker (Jesse) of Slocomb; his son Calin Johnson (Ashley) of Headland; his granddaughter, Charlianna Coker of Slocomb; his mother, Mildred Johnson; his sister, Marie J. Kirkland (Phil); his brother, Myron Q. Johnson (Laura); a special cousin, Andrea Tew, all of Headland; and several nieces, nephews, and cousins.

Our establishment does own and operate its own crematory, so your loved one never has to leave our care.
To order memorial trees or send flowers to the family in memory of Marty Oneal Johnson, please visit our flower store.