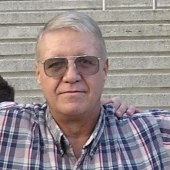 HEADLANDRalph Edmond "Edd" Oates Jr., a resident of Headland, died Saturday morning, November 9, 2019 at the Crowne Health Care of Eufaula. He was 75.

Mr. Oates was born and raised in Henry County to the late Ralph Edmond Oates, Sr. and Flora Jefferies Oates. Edd was a graduate of Headland High School and went on to graduate from Troy State University (Troy University) with an accounting degree. He worked with several companies, including some overseas. He was also an insurance salesman before he retired.

Surviving relatives include his sons, Grady Oates and Wyatt Oates (Erin); his daughters, Charise Glass and Sharla Oates; his granddaughters, Lily and Natalie Oates, all of Atlanta, GA; his sisters, Renora Oates Walden and Ruth Oates Jones (Tony), all of Headland; and several nieces and nephews.

celebrating a life one family at a time
To order memorial trees or send flowers to the family in memory of Ralph Edmond Edd Oates, Jr., please visit our flower store.