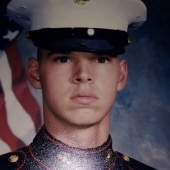 Macon, Georgia. Mr. Randall Lance Creel, a resident of Macon, Georgia, formerly of Headland, died early Sunday morning, September 15, 2019, in a Mobile Hospital, from injuries sustained from an accident on Thursday night, in Dothan. He was 44.

Memorial Services will be held at 6:30 P.M. Thursday, September 19, 2019, at the Wright Funeral Home & Crematory Chapel, Reverend Bob Parnell officiating. The family will receive friends from 5:30 until 6:30 P.M. Thursday before the service. At the familys request, in remembrance of Lance, they request everyone to wear Alabama Football attire to his service.

Lance was born in Abbeville and lived most of his life in the Abbeville, Headland, and Dothan area. Lance attended Headland High School with the Class of 1993. After high school he joined the U.S. Marine Corps where he served five years. Lance was a welder in the commercial construction industry. He loved Alabama Football, being outdoors, his garden, listening to his music, but most of all he loved his kids and grandkids. Lance was preceded in death by his brother, Nicholas Johnson and his mother, Janet Lynn Hallford Johnson.

celebrating a life one family at a time
To order memorial trees or send flowers to the family in memory of Randall Lance Creel, please visit our flower store.