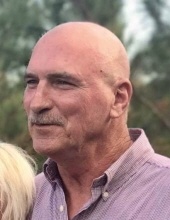 HALEBURG.…Ricky Randall Cooper, a resident of Haleburg, Alabama, passed away Monday morning, January 18, 2021, at his home, surrounded by his loving family. He was 67.

Memorial services will be held at 10:00 A.M. Saturday, January 23, 2021, in the Worship Center of First Baptist Church - Headland with the Reverend Joey Hudspeth officiating. Eulogies will be given by Dr. Perry Mobley and Harnage Elliott. Wright Funeral Home & Crematory is in charge of the arrangements. At other times the family will be at Ricky’s home, 336 County Road 112, Columbia, Alabama 36319.

In lieu of flowers, the family has requested contributions be made in honor of Ricky Randall Cooper, to Cancer Treatment Centers of America.

Mr. Cooper was born in Andalusia, Alabama to the late Sam Cooper Jr. and Glendora Liles Cooper. He lived the early years of his life in Red Level, Alabama. He was a 1972 graduate of Red Level High School. He worked the majority of his career on off shore oil rigs, where when he retired, he was a safety contractor. He loved the outdoors, fishing, hunting, and planting things to watch them grow. He was known for his generosity for helping anyone in need. He loved the Lord and his family. He attended Haleburg Methodist Church and also Union Freewill Baptist Church in Abbeville.

Along with his parents, he was preceded in death by his wife, Donna Jo Cooper; and his brother, Tony Cooper.

Our establishment does own and operate its own crematory, so your loved one never has to leave our care.
To order memorial trees or send flowers to the family in memory of Ricky Randall Cooper, please visit our flower store.