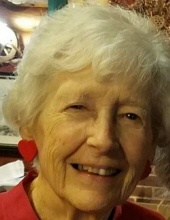 ABBEVILLE.…Rosalee Henderson Burke, a resident of the Henry County Health & Rehabilitation, formerly of Headland and Eufaula, Alabama passed away Tuesday, November 24, 2020. She was 86.

Funeral services will be held 6:00 P.M. Wednesday evening, November 25, 2020, at Wright Funeral Home & Crematory Chapel with Reverend Ricky Sowell officiating. Burial will follow at a later date in the Fairview Cemetery, in Eufaula, Alabama. The family will receive friends from 5:00 until 6:00 P.M. Wednesday evening before the service at Wright Funeral Home & Crematory.

Mrs. Burke was born in Ozark, Alabama, to the late William Henderson and Mary Hauty Dunn Henderson, and lived most of her lifetime in Eufaula, Alabama. In her childhood years she attended the First United Methodist in Eufaula. For most of her adult lifetime she was involved with her late husband, Jack Donald Burke, in the operation of Pacer Lite & Trim in Eufaula and Hidden Valley Ranch in Georgetown, GA. As an adult and resident of Eufaula, AL she was a member of the Parkview Baptist Church and the Morning Garden Club. Mrs. Burke moved to Headland, Alabama in the year 2000. In Headland she was very active at Bethlehem Baptist Church where she was a member of the Joy Sunday School Class.

Along with her parents and her husband, she was preceded in death by a step-daughter, Cynthia Crannell; a step granddaughter, Jennifer Cullen; a sister, Margie Inez Johnson; her brothers, James Henderson and Marvin M. Henderson.

Our establishment does own and operate its own crematory, so your loved one never has to leave our care.
To order memorial trees or send flowers to the family in memory of Rosalee Henderson Burke, please visit our flower store.