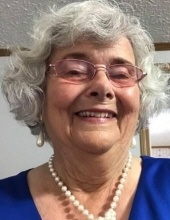 COLUMBIA…Mrs. Sara Mathews Deese, a resident of Columbia, Alabama, passed away Monday morning, January 24, 2022, at Saad Hospice Facility in Mobile, Alabama. She was 71.

Graveside services will be held 11:00 A.M. Thursday January 27, 2022, at Mt. Ararat Baptist Church Cemetery in Webb, Alabama with Reverend Fred Bacher officiating. At other times, the family will be at the home of son, Tim Deese, 1711 Silcox Road in Ashford, Alabama.

Flowers will be accepted, or contributions may be made in honor of Mrs. Deese to the Dothan Country Fellowship Children’s Ministry in Rehobeth, 211 Johnny Murphy Road, Dothan, Alabama 36301, or the Angel of Hope Foundation in Dothan, Alabama.

Mrs. Deese was born June 07, 1950, in Dothan, Alabama to the late Ralph Louie Mathews and Lizzie Mercer Mathews. She was born and raised in the Dothan area all her life. She met her husband, Walter and they shared a daughter, Sharon, and three sons, Terry, Larry, and Tim.
She was employed by Sony Corporation in Dothan for many years. She also worked with Twiins Lawncare of Columbia. She enjoyed gardening in her spare time and received a certification as Master Gardener. She was a member of Dothan Country Fellowship Church in Rehobeth and worked with the children’s ministry for several years.

In addition to her parents, Mrs. Deese is preceded in death by a brother, William “Bill” Mathews, and a sister-in-law Lillian Mathews.