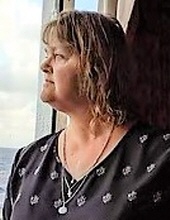 Sharon “Layne” Harris, a resident of Cottonwood, AL, passed away Tuesday morning, September 21, 2021, at a Dothan hospital. She was 50.

A Celebration of Life Service will be held 2:00 P.M. Saturday, October 2, 2021 at the Williams home, at 37 Brace Road, Summertown, TN 38483. Eulogies will be given by Eddie Harris and other family members. Wright Funeral Home & Crematory is in charge of the arrangements.

Ms. Harris was born in Lawrenceburg, TN to Clarence Juke Busby and the late Linda Amelia Kobeck Cummings. She was also raised by her late adopted father Timothy Albert Cummings. She lived most of her lifetime in Summertown, TN. Before becoming medically disabled, Layne was a licensed practical nurse. She moved to Cottonwood, AL seven years ago to be close to her grandchildren. She loved traveling and had seen a lot of the United States of America, but would have been a world traveler if she would have had time. She passionately loved her family but especially her grandchildren. She was of the Baptist Faith.

Our establishment DOES OWN AND OPERATE ITS OWN CREMATORY, so your loved one never has to leave our care.
To order memorial trees or send flowers to the family in memory of Sharon Layne Harris, please visit our flower store.