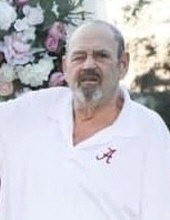 EDWIN, AL… Steven George Wilson a resident of Edwin, Alabama, passed away Monday night, July 4, 2022, at a Dothan hospital. He was 72.

Mr. Wilson was born in Los Angeles, California to the late Woody Wilson and Maxine Cavanaugh Wilson. He lived most of his life in the Henry County, Alabama areas of Wills Cross Roads and the Edwin area. He was a member of the Chester Chapel Freewill Baptist Church and a past member of the Pilgrims Rest Freewill Baptist Church. He loved hunting and fishing. He was an avid Alabama Football fan. His passion was coaching kids in football and baseball.

Along with his parents, Mr. Wilson was also preceded in death by his brother, Mike Wilson and his father-in-law, Glenn Byrd.

Our establishment DOES OWN AND OPERATE ITS OWN CREMATORY, so your loved one never has to leave our care.
To order memorial trees or send flowers to the family in memory of Steven George Wilson, please visit our flower store.