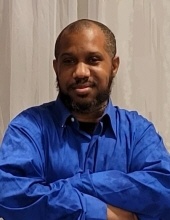 DOTHAN, AL… Terrence Graham, a resident of Dothan, Alabama, passed away Thursday, January 20, 2022, at a Dothan hospital. He was 37.
Funeral services will be 11:00 A.M. Wednesday, January 26, 2022, at Wright Funeral Home and Crematory in Headland, Alabama with Pastor Charles Davis officiating. Burial will follow in the Christ Temple Church Cemetery in Abbeville, Alabama. The family will receive friends Tuesday, January 25, 2022, from 5:00 P.M. to 7:00 P.M. at Wright Funeral Home and Crematory Chapel in Headland. Wright Funeral Home & Crematory is in charge of the arrangements.
Terrence Graham was born February 15, 1984, in Dothan, Alabama to Ward E. Graham Jr. and Deborah A. Graham. He lived in Newville, Alabama most of his life and attended Headland High School. He was a member of Christ Temple Church in Abbeville, Alabama. Mr. Graham was a member of the Masonic Lodge # 573 in Lawrenceville, Alabama, along with his grandfather and brother. Mr. Graham worked as the maintenance supervisor for the last few months at Houston Academy in Dothan.
Mr. Graham is preceded in death by his maternal grandparents, Alex Lingo, Sr. and Carrie V. Lingo.
Leaving to cherish his memories are his daughter Mackenzie Amiyah Graham; Mother of his child, Jamaya Debose; his friend, Sharon Johnson; his parents, Ward E. Graham Jr. and Deborah A. Graham; brothers, Kelvin Graham (Christina), Derrick Graham (Ashlie Chambers) and Darrod Hollis; paternal grandparents, Ward E. Graham, Sr. and Dollie M. Graham; numerous aunts, uncles, nieces, nephews and cousins.
Serving as active pallbearers are Kelvin Graham, Derrick Graham, Kaylon Graham, Chris Graham, Kameron Graham and Daryle Warren.
Special thanks to Pastor Denise Tolbert for her assistance at Christ Temple Church in Abbeville.

Our establishment DOES OWN AND OPERATE ITS OWN CREMATORY, so your loved one never has to leave our care.
To order memorial trees or send flowers to the family in memory of Terrence Graham, please visit our flower store.