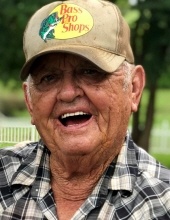 Funeral services will be held 2:00 P.M. Saturday, May 7, 2022 at Newville Baptist Church with Reverend Norman C. Simmons and Pastor Nathan Poe officiating. Burial will follow in the Newville Baptist Church Cemetery with Reverend Winford Gulledge officiating. The family will receive friends Friday evening, May 6, 2022 from 5:00 until 7:00 P.M. at Wright Funeral Home & Crematory.

Flowers will be accepted or contributions may be made to the Newville Baptist Church Cemetery Fund; P.O. Box 13, Newville, Alabama 36353.

Mr. Jones was born August 23, 1936 in Newville, Alabama to the late A.T. Jones and Eleanor Taylor Jones. He was a 1955 graduate of Newville High School. He received a diploma in bookkeeping from Riley Business College and served six years in the Air National Guard. Mr. Jones was well known throughout the agricultural community from his over 66 years as a row crop and cattle farmer. He was an active member of Newville Baptist Church where he served several years as a Deacon and most recently as Chairman of the Deacons. In the earlier years of his life, Tommy was a member of Union Springs Baptist Church where he served as a Deacon and Sunday School Director. He was very active in his community where he served on the Newville City Council, was Newville City Mayor and was Henry County District 5 Commissioner for sixteen years. Tommy served for 34 years on the Headland Peanut Warehouse Co-Op Board of Directors, including two years as President. Tommy also served on other community service boards to include The Southeast Alabama Regional Planning Board and the Human Resource and Development Board. Tommy had a passion for local sports and Alabama football. He was a founding member of the Headland Pee Wee Football Association. In his younger years, Tommy coached Little League and Pony League baseball and was an announcer for the Newville Bearcats. He also played men's slow pitch softball.

Along with his parents, Tommy was also preceded in death by a brother, Awin Jones.

The family wishes to express their gratitude to Mrs. April Poe, NP., for her loving care and compassion shown to Mr. Jones and his family throughout his illness.

Our establishment DOES OWN AND OPERATE ITS OWN CREMATORY, so your loved one never has to leave our care.
To order memorial trees or send flowers to the family in memory of Tommy Joe Jones, please visit our flower store.