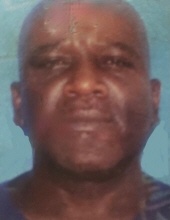 DOTHAN.…Walter “Walt” Daniels Jr., a resident of Dothan, AL passed away early Friday morning, October 9, 2020, at a Dothan Hospital. He was 64.

Funeral services will be held 12:00 P.M., Wednesday, October 14, 2020, at Wright Funeral Home & Crematory Chapel with Minister Eric Minniefield officiating. Burial will follow in the County Line Primitive Baptist Church Cemetery, north of Abbeville. The family will receive friends from 4:00 until 6:00 P.M. Tuesday afternoon, at Wright Funeral Home & Crematory. At other times, the family will be at 34 Weed Street, Midland City, Alabama 36350.

Mr. Daniels was born July 12, 1956, in Ft. Lauderdale, Florida, to Fannie J. Daniels. He was raised with love and care by his mother; Fannie, along with his late grandparents, Oddie and Charlie Murry, Sr.. Walt was an all around loveable and humble person. To know him, was to love him. He would lend a helping hand any way he could. He was always a person full of jokes. But most of all, he was the realest person you would ever meet. He didn’t meet to many strangers. He was just who he was, Walt Jr. Daniels, and any other nickname his friends gave him. Walt was a Graduate of Headland High School. He enjoyed attending his church, Little Rocky Mount Baptist Church. He loved his job at Rushing Enterprises Inc., where he had worked over thirty years and was still working at the time of his passing.

Along with his grandparents, Walt was also preceded in death by his uncles, RB Robinson, Charlie Murry, Jr., and Leon Murry; his aunts, Lillie Bell Key and Joyce Murry.

Leaving to cherish his memories are his son, Derrick Daniels of Abbeville, AL; his loving mother, Fannie Daniels, his brother, Rubin Cole (Debra); longtime friend, Katherine Pearce and son Cameron Pearce; his niece and nephew, Rory and Monika; his aunts/sisters, Betty Robinson, Annie Johnson, Lara Murry, and Dorothy Murry; his uncle, Will Key; and a host of cousins, extended family, and friends.

The family would also like to acknowledge his work family “The Rushing Crew” and his church family at Little Rocky Mount Baptist Church, in Tumbleton, Alabama.

Our establishment does own and operate its own crematory, so your loved one never has to leave our care.
To order memorial trees or send flowers to the family in memory of Walter Daniels, please visit our flower store.