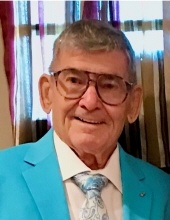 ASHFORD, AL - William “Bill” Walter Watkins, a resident of Ashford, Alabama, passed peacefully Wednesday morning, May 4, 2022, at his home with his family by his side. He was 92.

Mr. Watkins was born in McDowell County, West Virginia, to the late William Walter Watkins, Sr., and Mary Louise Tosh Watkins. He served his country during the Korean war as a Staff Sergeant in the U.S. Air Force, stationed in Japan. He received a Bachelor of Science degree in Business Administration from Virginia Polytechnic and pursued his entire career in the grocery and convenience store industry. He played a pivotal role with Majik Mart to open the first chain of convenience stores in England. Upon returning to America, he was instrumental in designing the Modica Market at Seaside Central Square in Seaside, Florida. In earlier years, he was an avid hunter, fisherman and loved the outdoors. Bill became a volunteer for Red Cross Disaster Services in 2005 serving victims of hurricanes Rita, Katrina, and Florence in addition to the flooding disaster in Bainbridge, NY (2006), the Alabama tornado (2007), and the San Diego Wildfires (2007). He became certified as an instructor in many Red Cross services and went on to teach others. Later in life, he returned to his love of woodworking with his focus being on what he would enter in the National Peanut Festival contest each year. He was a member of the Liberty Baptist Church in Pansey, Alabama. Following in the footsteps of his father and other Watkins,’ Bill joined the Masons in Henderson, North Carolina in 1975 and became a Master Mason. He moved his membership to lodge 493 in Ashford and was a member in good standing.

Along with his parents, he was preceded in death by his wife of 56 years, Mary Lou Taylor Watkins and a granddaughter, Katelyn Nicole Boyd.

Our establishment does own and operate its own crematory, so your loved one never has to leave our care.

To order memorial trees or send flowers to the family in memory of William "Bill" Walter Watkins, Jr., please visit our flower store.