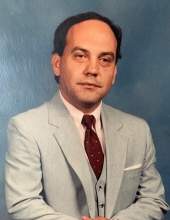 DOTHAN.… William Eddie Ward, a resident of Dothan, passed away Sunday evening, February 9, 2020 at a Dothan hospital. He was 65.

Mr. Ward was born in Headland, Alabama to the late John Daniel Ward, Sr. and Leola Smith Ward. He lived most of his life in the Headland area before moving to the Dothan area nearly twenty yeas ago. Eddie worked at Twitchell for over thirty years. After leaving Twitchell he worked for several local florists. At his passing he was employed at Inside Accents. Along with his parents, he was preceded in death his sister, Marvella Ward; his brothers, John Ward Jr., Bobby Ward, Seaborn Ward, Carl Edmonson, and Daniel Ward.

…celebrating a life one family at a time…

Our establishment does own and operate the only crematory in Henry County, so your loved one never has to leave our care.
To order memorial trees or send flowers to the family in memory of William Eddie Ward, please visit our flower store.